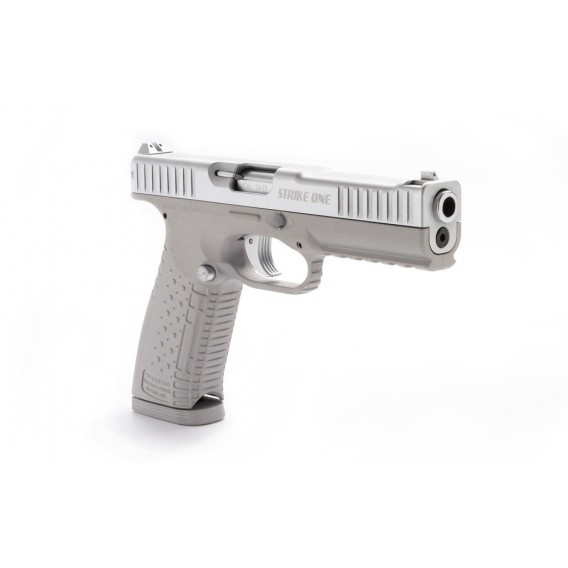 * All product’s images are illustrative.

The STRIKE ONE semiautomatic pistol comes to the world scene in 2012 as a completely new and revolutionary gun.

This product can be sold to Estonia residents only and delivering procedure is
in accordance with the  Act of firearm  § 74 lg 1!
The resident of Estonia must have a valid permit for purchasing this type of weapon.
This product cannot be delivered by post.
After the product has been purchased it can be picked up directly from the store only!

The Strike One semiautomatic pistol comes as the fastest, most controllable, most accurate and hard hitting service pistol available today on the world market.

A full 5 inches cold-hammered barrel, along with a 75 Hrc surface Nitrite treatment for barrel, locking block, slide and operating pin industrial production standard, warrant safe and flawless use of the pistol in excess of 50.000 rounds.

The frame of the Strike One was also engineered with exacting and unprecedented standards: the operating frame block, again made of the best 42CrMo4 steel, features long rails for total axial and torque control of all the moving parts, pins and springs. The frame itself, with it’s unique and true 3D hand grip (and not just “millings” on a flat surface) comes today as the only service pistol with a full fledged IPSC standard magazine insert “miniskirt”, allowing Special Operation and SWAT teams to work as if they were using a competition pistol.

The trigger system of the Strike One, again like no other before, operates mainly on the horizontal plain, without raisers with variable and long, rubbery trigger pull, but with a crisp and short firing pin release: this is the secret, along with a lighting fast locking mechanism, behind the unbelievable semiautomatic firing speed of our pistol.

Finally, thanks to the in-line barrel operation, the Strike One allows the development of a number of extremely innovative accessories, which base the designing and operative criteria on the “carrying in-line barrel”, such as for instance the LRC (Long Range Conversion).

HIGHLIGHTS:
With the launch of the Strike One, 3 separate patents have been already filed for:

THE LOCKING SYSTEM:
The Strike Locking System has no equal in the history of semiautomatic weapons. It is based on the "1 degree of liberty mechanical law" of the main components (Barrel, Locking Block and Bolt-slide). The major benefits of the invention are:
• In line barrel operation with very tight tolerances with the slide
• Lowest barrel center line over hand grip in history (12 mm)
• Lowest vertical mass movement on operating pin (locking block only and not the whole barrel)
• Fastest locking-unlocking time
• Fully rail-guided barrel inside the slide, for tremendous accuracy coupling with the aiming devices
• Highest ammunition feed level into the barrel, for trouble-free use of any type of bullet, with no deformation upon chambering
• Shortest unlocking-locking action travel (4mm diameter operating pin)
• Totally sealed barrel-to-slide ejection port area, for safest operations of the gun in mud, dirt, dust
• Strongest slide at ejection port area, due to minimal open profile of the same

THE AMBIDEXTROUS MAGAZINE RELEASE:
For the first time a traditional two-sided female notch magazine can be used with a totally ambidextrous, lateral operation (conventional push button) latch. This has been possible thanks to the Arsenal Firearms new patented design, made of only 2 parts: latch and spring-stop. The system is entirely taken down by hand with no tools and features also the engagement of both magazine notches contemporarily for maximum safety of retention during extreme use of the pistol and will prevent accidental magazine loss as the gun drops on a hard surface.

THE TRIGGER SAFETY:
Unlike other competitor’s trigger safety systems, where the trigger is split into 2 parts making the shooter often uncomfortable with trigger feel and release predictability, the Arsenal Firearms single trigger safety system comes as another true patented innovation: the trigger in fact cannot be accidentally pulled for the top portion of the arch (i.e. by a foreign object) as the special shoulder and rotation-travel of the trigger body will prevent it. The result is a safety trigger, with single arch and a competition pistol feel and performance, for maximum first-shot trustable placement.